Shinyribs (a.k.a Kevin Russell) is back with his inimitable slinky rock, soul and funk. Imagine KC & The Sunshine Band colliding with Dr John and Al Green. Picking up on the vibe of 2016’s epic I Got Your Medicine Russell has penned ten songs and put together an accomplished band including backing singers and brass.

The result is a varied album of tracks that make you wish you could see the band live. Russell is currently touring the record and on his ever-entertaining Twitter feed he writes that “Hoods Of Cars” is getting the best live reaction. I can see why: a horn intro à la Average White Band gives way to Russell’s vocals. This funky riff supported by some cool guitar and backing vocals is easy to imagine as a crowd favourite. In fact Russell’s Twitter feed is a thing of considerable entertainment with his original take on many things: he can switch between some erudite musing of 280 characters on human behaviour to thoughts on plastic pollution, Walter Cronkite, sport, weed killer or green chilli stew.

“Highway Of Diamonds” settles into a West Coast groove with a loping beat and some clear electric guitar picking. A delicious melody with lashings of backing vocals enthrals. This of all the tracks illustrates the competence of the band to either let rip or scale back to let the beauty of a melody shine through. The diversity of sounds is down to the arrangements and ability of the band. This more than anything else tells you are listening to a crafted and memorable release. In all this revelry, and allied to his pithy thoughts, he can pen a mean lyric:

“Laughed at and left out, sold into self doubt

Highway of diamonds-no one will ever notice we’re gone

Highway of diamonds here’s to the shy ones

“Crazy Lonely” is a reflection on the human condition masked by our cell phones. Maybe this is his best vocal on the album bursting with personality; either straining or soaring to a beautiful falsetto. Less complicated Shinyribs move on from life’s trials to sing about “Savannah Chanelle” – a girl he’s set his heart on. Courtesy of the Tijuana Trainwreck Horns the trumpets toot, a saxophone blows bass notes and the organ grumbles as he and the his troupe implore her to call. She should.

Each track has a signature beat and your trying to remaining stationary is futile. This is one of the most engaging Americana Soul releases of the year.

Chris left the bar leaving nearly half a pint sat looking lonely and abandoned at the table. Den and I had no interest in the drink but if he’d left for good then we could command the table and sit down. We did. Den and I were in The Bluebell with our wives. Needless to say we were apart from the ladies discussing gripping things such as plastering, taps and the mysteries of insurance claims.

Chris, however, returned but was happy to share his table. Like us he was enjoying a summer pint on Fossgate. Chris was around 70, thick set, a ridiculous shock of thick grey hair and a Van Dyke beard.

END_OF_DOCUMENT_TOKEN_TO_BE_REPLACED

When Anna suggested a European jaunt to Vienna in August she thought about amazing cake, enormous history, wide vistas of a beautiful city etc. and I immediately thought I could ride my bike there! In fairness one of my favourite films is ‘The Third Man’ set in post war Vienna with Orson Welles and I note there is a walking tour of the famous images in the city from that 1949 classic. From Vienna we’re planning to get the train to Prague for an overnight stay and then later another train day trip to Bratislava. This will be my first visit to Slovakia. (They must be excited, I know).

It’s only about 900 miles from York. And my plan was hatched via maps being perused and another spreadsheet being created (with the daily mileages, elevations to be climbed and camping stops identified). It’ll take me 17 days of around 60 plus miles a day with a couple of rest days thrown in. This is quite a light schedule for me and I may change the route.

The route is from Zeebrugge (and Belgium) into Luxembourg. This small country does have some rugged hills and after those undulations I’ll be in South Germany. Last year I spent a long time here but further east and well south beneath Munich. I must admit it wasn’t inspiring and in someways for all that Germany is ‘switched on’ and ‘happening’, albeit industrial, then what I saw wasn’t. However this is a different part of the south and one route has a stop at my favourite record store in Stuttgart which would be a highlight before finding the Danube and trundling into Vienna. Germany has some interesting laws, the most worthy being the prohibition of trucks on the roads on Sunday. In fact our 24/7 retail life hasn’t afflicted the Teutons yet. Power to their elbows.

My mission, as I trundle through their land, is to get one person to smile back.

Our Summer has been pants and apart from one freak day it’s been fleeces and umbrellas even into July. I hope I haven’t missed the European heat wave. I am looking forward to something sizzling.

As I set off I’ve amassed nearly 2,000 miles year to date and much of that has been dragging myself up and down the Yorkshire Wolds. I should be in reasonable nick. I post the following snap: I once did a presentation of my expedition across the USA and someone, only half in jest, commented that they never saw a picture of me riding a bike! 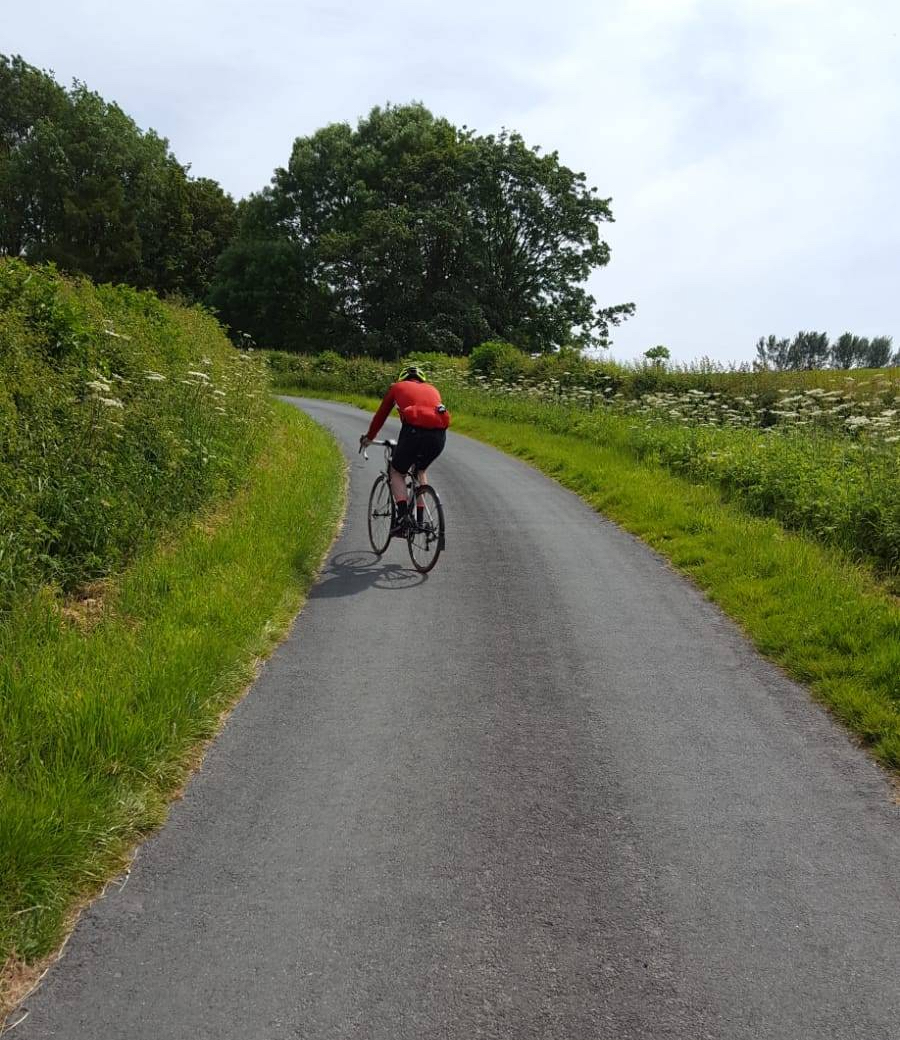 Grey Nomad? This phrase apparently is quite common for over 55 independent Australian travellers but it came to my attention from a millennial who’s blog I read about a ride down the east coast of Australia. She was put out that whilst singing along to a bearded pal playing a guitar at an early hour of the morning on a campsite; an elderly  male clambered out of his tent to tell the player to stick the said instrument up a place where the sun wouldn’t shine the next day. I feel I was that man. She named him and others as ‘Grey Nomads’ for this outrage. I shall wear the badge with honour.

The first day sees me depart Acaster Malbis and cycle to the ferry in Hull. (Memo to self: do not be rude about Hull as Steve will be unhappy).

Katrina, Favourite Eldest Daughter, is leaving London and her old job to move to Manchester. London was fine but she cannot envisage ever getting onto the property ladder in t’Smoke and the North offers much better prospects. I’m not sure that the fact that her younger sibling is already established there is the draw! (Sophie is flourishing at adidas and now moving into her second flat with her partner). As a professional Human Resources professional Katrina’s job in London was very much a ‘coal face’ type of responsibility looking after the NSL employees servicing Westminster Council’s parking regime as a contractor.

Her previous job was at the plush offices of the National Broadcasting Company in central London. She went from here to hot desking above a shop somewhere in Westminster. Apart from a salary there were no cushy perks. She handled the recruitment and disciplinary issues of over 150 staff. It seemed to be a completely male dominated environment with a large churn in Parking Marshalls (wardens to you and me) of considerable ethnic mix. These people were not highly paid and trudging the streets in winter issuing tickets and on occasion receiving abuse cannot be the easiest way to earn a living.