I tried to confirm the BBC weather report (that there would be thunder and lightning that night and the following morning) with a local. The site manager said that it might rain the following afternoon. What did she know as at about 10.30pm an electric storm started (and lasted 90 minutes).

Yes, we’ve all seen or experienced thunder and lightning but this was new to me. Torrential rain, lightning such that I could have read a book and thunder worse than being in the mosh pit of a Motörhead concert. My little tent nearly took flight as I was buffeted. Fortunately I’d try to ‘seal down the hatches’ before attempting sleep before the storm. And I may have got damp but not wet, as moisture abounded. On one side the caravan had his awning trashed and on the other the camper moved furniture, a tent and two children (into a car he went to fetch from off the site) during the storm. This was irritating given that I was beside this operation in a little tent. Given the weather then the noises and shouts were similar to how I imagine it was on The Titanic.

The next morning I awoke to noisy Germans slamming car doors at 6.30am (don’t they teach this lot any manners at school?) and I eventually got up to survey my property. The main issue was mud and tree debris on the tent along with most things being sodden that were outward facing. So I started cleaning by mainly hosing stuff down away from the pitch. I needed a surface that was not earth and stones.

At just before 10am I hit the road. I saw a Post Office and much to my amazement remembered that I had postcards to post (this task had been delegated by the departing Anna a day or two before). Now the postal service and its outlets appear to be a social club rather than business and I queued patiently whilst various souls unloaded their tribulations to the post mistress. None of these issues had anything to do with posting anything. Eventually fearing that my continued presence would require shaving kit I just abandoned the task and got pedalling. (Fear not I did eventually find a P.O. and did the deed later).

The first task was to head east to find another coastline to ride up. This took me through an agricultural landscape with fruit trees and some vines. Also to be found, in the shade, in these small villagers were very elderly men sat wearing singlets ‘shooting the breeze’. If I had been closer and spoken Croatian then I am sure I’d have heard them saying that France’s Anton Griezmann’s gazelle like leap over an outstretched limb (that he never touched) and his subsequent tumble like a sack of potatoes falling from the moon had brought into question whether his mother was married at the time of his birth. (This gymnastic misdemeanour took place in the first half of the World Cup Final and the free kick led to France’s opening goal). 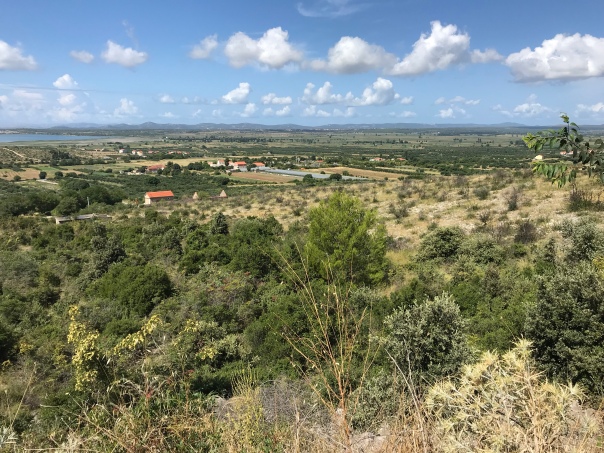 I cycled through one shelled town that had a monument to fallen Croatians during the 1993 war. Islam Grčki was original the final frontier of the old Ottoman Empire and more recently came to be a Serbian enclave. (There was no religious influence that I could see). Here the Serbs and Croats fought and several buildings still remained in ruins and abandoned. It was not typical of this part of the country.

I’m still fascinated that Croatians might have been threatened (or worse) by Serbia but would you shell and shoot long term local neighbours? I imagine prior to this bloody conflict some men worked together, their kids went to the same schools and the women shopped at the same shops…

I stopped at Posedarje for a pizza and coke after declining the opportunity to make a bungee jump. From here I pedalled up the coast road. It was hot yet the road was quite kind, albeit up and down. I cycled past resorts and campsites but in time the coast line became jagged and rocky. The road builders struggled to build anything passable on the low coast line to construct a road. This meant the road went up and then down quite severely. I was a hot and weary traveller at this time.

I’d research a campsite in Lukovo Sugarje but when I got to this hamlet I could find nothing. Even worse was descending on the road high above the coast to find the only way of getting back was by pushing. It was getting late but apart from wild camping then I had no options other than to push on to the next big town 13 miles further north. Light was falling and even the traffic and motorcycles seemed to stop.

I got to Karlobag at after 7 pm and it was quite a lively place. This was mainly due to it being a ferry port to one of the islands. I was bounced at one hotel and so I asked for advice of where I might stay? I was directed to the still open Tourist Information who suggested an apartment. Even better was that the young staff rang up the apartment and agreed the price (€50 or 370 Kuna).

So I met the landlady by the petrol station and her English was as awful as my German. However, her daughter was at hand with fabulous English (at this point I remembered my Favourite Youngest Daughter’s advice to speak English normally rather than enunciate every syllable slowly in such a way that I might use when conversing with a simpleton). Actually she worked in Austria, in a bank, but was back in Croatia with her husband and sprogs for a holiday.

Anyway I showered and then descended into town for some dinner. A happy end to the day.