The surprising thing was that as a landmark I was expecting to see the Belgium border as my seventh country arrived. However, as I’m pedalling along it dawned on me that with all the Belgium car number plates, a Belgium postal services van and local buses that I was actually in Belgium. There was no marked border. Ah, you may be thinking; its down to all those happy Europeans tearing down borders (unlike us disagreeable Brits who seem to be intent on erecting them). Nah, as I cycled through France then the signage was regular for all the 96 internal Départements and the other administrative 12 Régions. Even in Belgium where the country is split into French and Flemish (Dutch) speaking when you leave Wallonia and enter Flanders there is signage. They are proud of their nationality yet I suspect someone in the Government isn’t and hence the absence of signage.

From a rural setting I was now into an urban one. The traffic was a lot more intense and less well behaved as everyone seemed anxious to be on their way. Hence women drivers would appear out of side streets cutting you up or other drivers would drive way too close. So much for Belgium being flat. It was in the morning that I was still working my way through the gears to cope with the regular inclines.

Below is a fabulous depiction of the 1988 World Championship Road Race held in Ronse. Fondriest won it after sailing past Bauer and Criquelion. The latter two were well in front of Fondriest but clashed in the final sprint. Bauer was subsequently disqualified.

Eventually Belgium behaved like Belgium and there were no hills in sight. I was steered toward cycle paths and with some good things (see below) and some less good by being blocked by vegetation or having rutted surfaces. 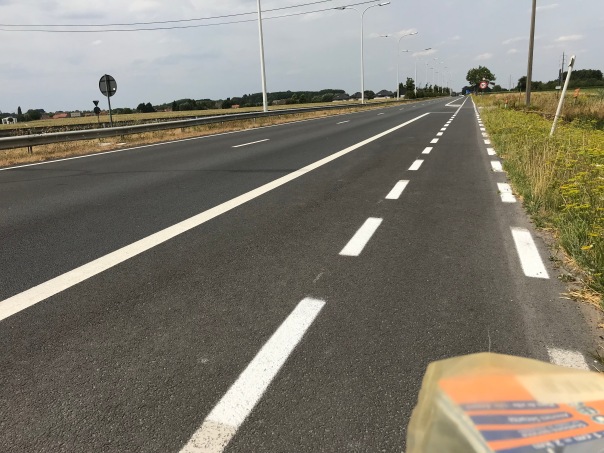 The ferry to Yorkshire was tomorrow night. This meant that I would have the opportunity to make up any distance shortfall tomorrow, However, I simply wanted it done and tomorrow could be a short distance day with my arriving at the docks in good time with no worry about delays, mechanicals or some such.

With this in mind I pushed on for my longest day. A worrying aspect of long distance riding in high heat is that your appetite disappears yet your need for calories grows. Toward the end of the day I passed a few supermarkets not knowing what to buy as I really had no interest. Eventually I made a decision that I really must stop. Here I found some hummus, bread, a donut and fruit. It was a lucky stop because we were close on 7pm and everything was shutting.

The only campsite in miles was to the east of Bruges. It was a small and very busy site close to the centre. Not for the first time the signs were up saying full! I walked in and I think I got the last pitch in a busy tent area full of cycle tourers.

One such was Jack who’d done a three month round trip to Sicily. Respect. He was now heading home after meeting up with his wife (Tiber) in Paris who was camping and cycling with him home to Holland. Inevitably our conversation turned to how he crossed Austria! Not easy with talk of enormous percentage gradients. Another German lady was ambling around Belgium and France. She was about my age and seemed to be a seasoned camper who was taking it easy and had routes that avoided hills. Other cycle tourers abounded and I think that the reality is that they fall into another type of tourer who do short distances. Maybe they actually do this stuff for pleasure?