So how resuscitating was one day off the bike after 440 miles in 7 days? Well, I’m not sure that I was a ‘new man’ after that brief sojourn but it was nice to wake up and think I had a day off (with a stiff back). You also feel a little restored by having clean clothes and other things sorted. However, it was time to throw my leg across that top tube again and go.

Bernadette shook my hand vigorously, in a bloke sort of way, as I paid and departed. (The two boiled eggs at breakfast are to remain a secret in case others request them).

So now for the next mountain up to a ski resort. This was another 600 metre climb. Fortunately the air was chilly and refreshing due to the altitude and I ground up on the ‘granny gears’. As trucks were passing I knew the climb was not too steep. They don’t ‘do’ steep climbs. Eventually passing these girls with their bells I reached Obertauern.

It is a large resort but quite empty at this time of year. Nearly a ‘tumbleweed scenario’ with loads of construction taking place in the off season. I felt that I should celebrate by having my photo taken. However the euphoria may have been misplaced as there was plenty of climbing on other days to come.

Meanwhile just over the summit Nicholas came into view. He’d left France with a pal (up the hill apparently) and was en route to Istanbul. He had no phone with Apps or a map. I’d also guess that he wild camped most of the way here. He’ll get there but it could be a journey of hell. I brought out my awful school boy French, which in fairness wasn’t much worse than his English and we pored over my map. He’d had enough of mountains! Frankly he may have to dig deep. I’d also tried to warn another chap from Dresden about the Katschberg. His grinning face suggested that I was a fuss pot.

So I fell downwards into the heat. It was soon in the mid 30°C’s again. Burning and impossible to remain stationary in. My water consumption is immense. I always try and have a couple of litres on the bike. However when I stop an ice cold Coke is up there with a glass of Chateau Margaux or a pint of Timothy Taylor’s beer in terms of pleasure.

Funnily enough the number of cycle tourers exploded into double figures for the first time. All heading upwards whilst I mainly freewheeled down the long hill. Interestingly outside of Werfen, beside the road, in high viz jackets were two university undergraduates interviewing cycle tourers. They wanted information to go back to the town with. Werfen recognised this tourism cycled past their town and wanted a piece of it. 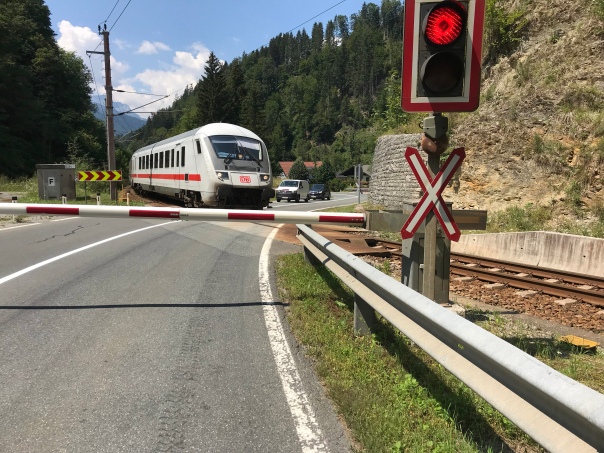 Lunch was at a roadside shed manned by some Bosnians. The curried bratwurst in a flatbread wrap with raw onions was sensational. I sent a photo to my Favourite Eldest in London for her authoritative assessment. She had spent a year in Berlin. Dismissive might be an understatement of her feedback! How these sophisticates move on…

Toward the valley floor that led to Salzburg the traffic picked up. Truly sharing the road again was not a pleasure. I stopped to do some research on my phone and found a campsite just east of the city.

I pitched my tent in a splendid field away from the caravans, motor homes and motorcycles. I was next to two French male millennials on their way to Klagenfurt (in Austria) for a wedding (in a Peugeot). I quizzed them on Emmanuel Macron and what they thought? One, being a socialist, didn’t like him and worried about his social and welfare changes. The other, more to the Centre, suggested that it was too soon to say. I noted how fabulous their English was and that they had the good manners when debating my questions between themselves to do it in English for my inclusion. Classy boys. On my other side were a family of 5 children with their parents from Sweden. They were beautifully behaved and the father needed a Transit van to ship them around and carry all the clobber.

So what did Austria offer? Just let me get a good night’s sleep first. 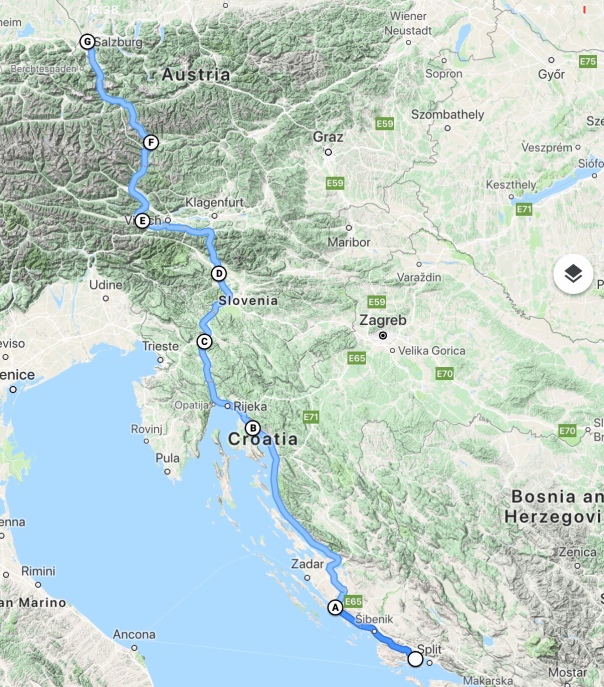