Bernadette had probably had a long day but the decision to offer a room at €54 had paid off and a booking had been made. Frankly, this was a slow summer in Mauterndorf. Hotels here made their money during the skiing season from November to April. They were also trying to cover overheads by filing rooms. But where was he? The internet booking said he’d arrive between 7 and 8pm and as he’d asked separately about storing a bicycle he was leaving it late given the darkness.

At about 8.20pm she rang his mobile but no reply. She had wanted to close Reception early. It was Sunday for heaven’s sake!

In fact her guest was, at this point careering down a 15% gradient hill in heavy drizzle minding to be careful on the part of the road surface that was being scarified and was grooved as road upgrades continued. His main worry was the failing light and whether when he got off this wretched mountain there would be more climbing before the hotel?

The day had started in rain and I’d thought about staying on at this convenient site an extra day as one of my ‘rest days’. However, every piece of clothing was wet or damp and so was the tent. Maybe it would dry during the day but cycling on a Sunday usually guarantees lighter traffic to contend with and certainly a lot fewer, if any, trucks.

So packing my bags out of the rain, by the washroom, was completed and I was off and up! As I left the campsite I was overtaken by a Fraulein on a bike going up hill. Hers was an electric bike. These are commonplace in Austria (and Germany). As soon as the price really becomes affordable in the UK we’ll be as keen as these Teutons. They sell a million in Europe every year. Using Sat Nav and my map I embarked on a route that looked steep. In fact I had to push the bike up hill for about a mile.

This was a shock and maybe indicated what was to come. I rationalised that I was on an important road as traffic seemed to flow past me – always an indication that the route is passable. At one point a VW van passed and then came back down the road and the driver shouted something to me in German. I grunted back. I think he was alluding to the impossibility of pedalling a laden touring bike to the top. Either this or “cheer up mate, there’s a defibrillator at the summit”.

Pushing – ignominious? Well yes, on some tours you may never have to contemplate this but on occasion there is such a long stretch (over 50 metres) that it is as quick as cycling. You look for an easing of the gradient so that you can get back on because when the slope starts to become passable then you’ll go a lot faster astride. I must admit that on an day’s ride of 7+ hours I consider how much energy I will use up by manfully pumping away up an impossible hill. Is it worth this loss? Also I’m increasingly minded that the load this puts on the bike’s chain and gears is intolerable and ultimately the bike will mechanically start to fail. Pushing is a seldom event but it’s an option. 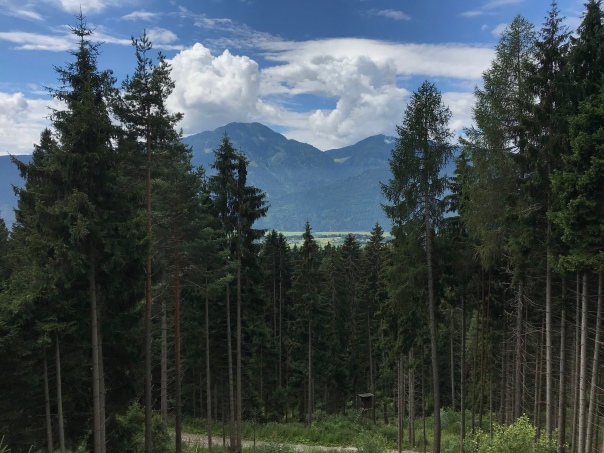 I did reach the summit and plummeted down and eventually came to Spittal where I ate a hot meal. I had a 32 mile climb left. It looked a persistent drag uphill but achievable; then would come a rest day. After having done 440 miles, mainly uphill, for 7 consecutive days the boy was due a day off.

Despite my struggles the scenery was amazing. The backdrop of the mountains, sun, clear air and wooded vistas are peerless. The forests look so vibrant and imperious. This is why the folk were out and about. Motorcycles are popular and I found myself sharing the road with many brutally powerful machines. Funnily enough (!) I didn’t see another cycle tourer all day. 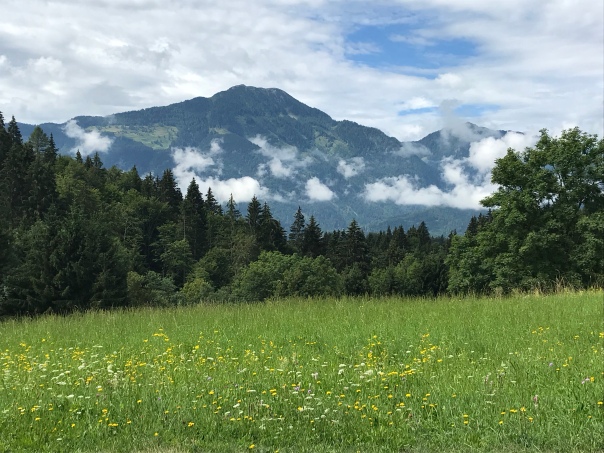 After Spittal I cycled up hill following an old ‘A’ road that had now been replaced by a motorway that was constructed above it. There were a few settlements and when you did pass pedestrians then in the best Austrian tradition you were ignored with a lofty disdain. The fact that you were visiting their country and spending money in their economy seemed to be an inconvenience. The slope was reasonable and progress was made, albeit, slowly.

Eventually I came to Rennweg (1143m) and I was now within about 10 miles of the finish. Surely after all that climbing then I was due a pleasing descent for a beer? A sign said Katschberg 6km and I knew this was not good news. The Katschberg is a mountain peak (1641m) with a ski resort on it. My route research had not indicated that it was a ‘mother’ of an ascent at 15%. I was tired now and started to push the bike hoping that around the corner the gradient would decrease and I could get back on. At this point of pushing a man came down the hill on a unicycle. This poor picture is a result of me slowly finding my iPhone to capture this lunatic. He must be on his holiday from a circus but I did admire his panache.

Anyway the majority of these 6km I simply pushed. The bike was in effect about at my shoulder level on this gradient. I pushed and I pushed. (The next day I was crunching paracetamol to try and ease a back that refused to bend). Despite my optimism that I was nearing the summit I knew that there was some way to go as cars came past smelling of burning brake dust – always a tell tale sign of steep roads where the motorists had to sit on the brakes to cope with the twists and turns downwards.

Frankly, this is an extreme illustration of how these tours can go despite all the research and preparation. You just need the fitness and a determination to see the job through. However, I don’t expect much sympathy for having got into this spot of bother.

Anyway, Bernadette was glad that I got there at 8.45pm and efficiently administered the booking and then no doubt went home to put up her feet. I was really pleased with the room and came back down and immediately booked two nights before she left. I never book two nights immediately anywhere even though I plan to stay longer in the town. I like to know it ‘works’ before committing. I showered and went in search of food.

The next morning included a leisurely all inclusive breakfast. I was seriously hobbled after the pushing and couldn’t bend to tie a shoe lace! I dried the tent on the balcony: this shocked my neighbour who was also out on the balcony having a cigarette. (The shock was me in my ‘budgie smugglers’. How was I to know the balconies adjoined?) I did all my washing, re-arranged the jumbled panniers and then strode into town. 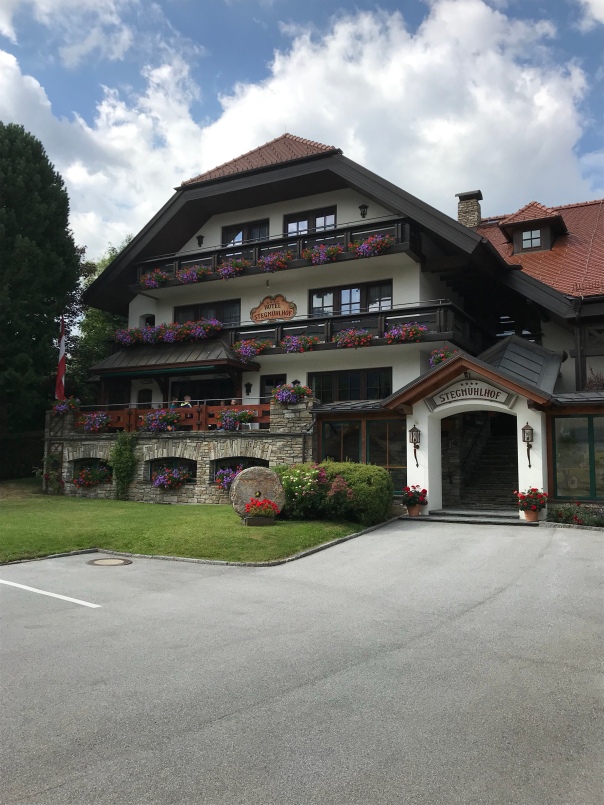 Bernadette had given me a free pass to the castle and to a ski lift up the mountain. Frankly, I’d had enough of mountains but was interested in the castle.

This served as a toll gate for travellers/merchants moving goods between the North and South. Apparently wine was the major item. Inevitably the toll went to the church. The Archbishop in Salzburg had his man installed managing and counting it all. The first construction was in 1250. The exhibits were all about the occupants and their lives. There was an audio guide that told you everything in great detail. I liked the fact that they had a clothes box for the kids to try on outfits and so provided something for everyone. 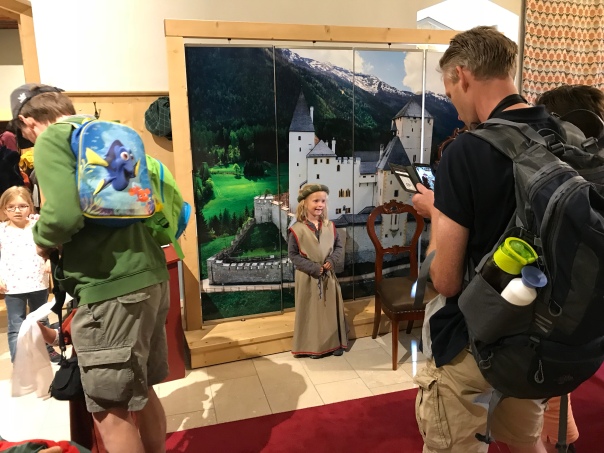 It fell into disrepair at various times during it’s life and early in the 20th Century a doctor bought it. The man in question served with Herman Goering’s father during WW1. Anyway it became a bolt hole for Goering during the 1920’s and 1930’s. The doctor’s wife left it to him when she died in 1939. However, he never signed the land registry papers to confirm his ownership: he was too busy with genocide and the like. He never came back as he self administered poison in 1946 at the time of the Nuremberg trials.

After this I wondered around this beautiful town. It really is chocolate box pretty and tried to replace some lost waistline.

Then it was back to the hotel as I needed to clean the bike and try and get all the Croatian mud off the tent.

Me: Thank you, I’ll have the soup and Wiener Schnitzel

DF: With rice or fries?

DF: The soup is only noodle and no beef

Me: No problem, that will be fine

Me: Ah, that’s the Wiener Schnitzel. Where’s the soup?

DF: Ah, you’re right. Sorry I will take this back.

Me: No, don’t worry I’ll have it and you can bring the soup later.

DF: No, it is wrong. You must have the soup first.

(She was right this time but it was tepid. I ate it, life’s short)

DF: And here is the Schnitzel

(Again she was right but no rice just chips)

You can see my challenges over this last week.