The start was flat! I trundled through these small holdings watching as the villagers woke up, drove to work or sat in cafes sipping coffee. I cycled along the wide and beautiful Sava river. They could take their time, it was Saturday. 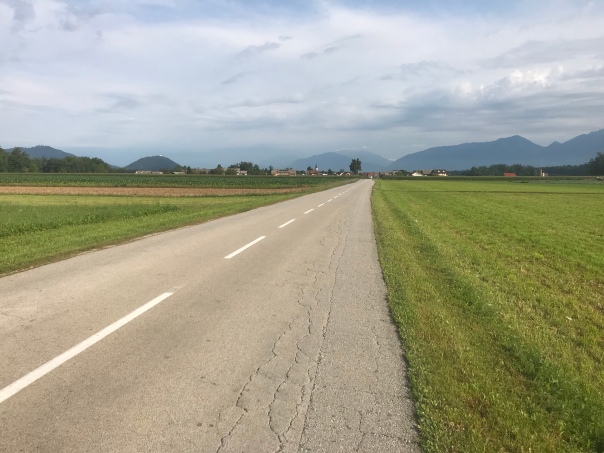 Soon I was past Kranj ruefully noting that all my Alpine routes were now side by side with flatter and more direct motorways. I started to climb and passed several cycle tourers freewheeling downhill on the other side of the road. Mine was a steady climb with occasional steep sections. All this was easier with some gears that now worked.

The temperature fell as I got higher and whilst never chilly it was the first time since I set off that I wasn’t being fried.

Up in the valley were some larger towns and Jesenice was one. A grubby and industrial town that had a large ironworks. This meant that movement of materials was by rail. Climbing past this was now about tourism and a dedicated cycle path that led up to the ski resort of Kranjska Gora. The views were now terrific with crystal clear rivers and steep backdrops of rock. I passed this monument that I think tells me about the murder of local partisans by the Slovenian fascists in WW2. An impactful tribute I think.

In my discussions with fellow tourer, Olly, in Croatia he talked of 18% climbs out of Austria into Slovenia and with a leaden heart I turned up the hill that advised such challenges lay ahead over 3 km. I bottled it after 100 metres and turned around. Plan B? Well there was another crossing further along that may be less steep. The only problem was that all signage indicated Italy was ahead but not Austria? However, I pushed on.

Lo and behold the Italian border came into view. Borders in the EU are sad derelict affairs with buildings that have literally fallen into disrepair. It would be better to remove these border buildings rather than let them rot. Rolling into Italy the road fell sharply. 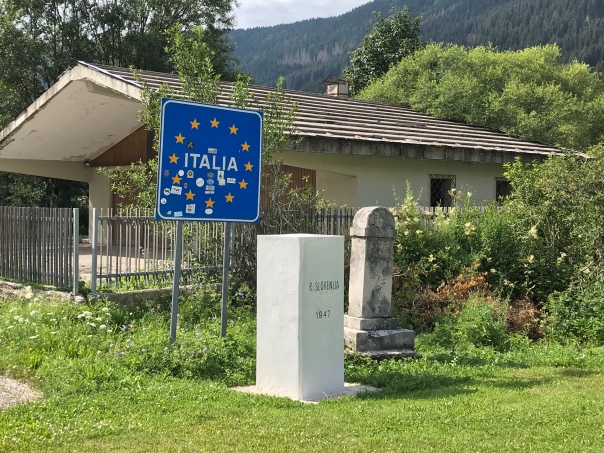 I just thought that I would have to ascend again and like all cycle tourers dreaded descents as much as ascents because of the future implications. Eventually I fell into Tarvisio where I saw from on high a football match. I suspected this was a pre-season friendly because of all the substitutes, no crowd, black players and a proper referee. I climbed a little, went through another derelict border crossing and still kept falling. I was in Austria. Rejoice!

I planned to stop as soon as I could and identified a campsite. I found a supermarket and bought some ingredients to make an omelette including butter. It was hot and it would melt but I would be at the campsite shortly, wouldn’t I?

Despite the short distance I had the bill ‘presented’ for the easy border crossing and ground about 2 miles uphill at 8% whilst the butter in my rucksack was getting warmer. Eventually I pulled into a campsite full of the Dutch and handed across my €15.

I think there is a good piece of university research in the offing as to why the Dutch like sitting on deck chairs in foreign fields during July and August. (One forty something Dutch neighbour on the site later told me they came here every year. They’d done that for 23 years. How much of the world have they missed?) I can confirm that I did seek and obtain a ‘Dutch’ hammer no loud music or nudity were involved in the transaction.

It started to rain and so my cooking was a rushed affair. I decided to hang my washing in the public washroom although I was doubtful they would dry at all (they didn’t).

I took cover at the bar with a beer and a map to plot one of the biggest cycling cock ups of my recent adventures. I will never forget it.