Day Two started late, after all 10am here is 5am in the UK. Like all travelling British males I carry a bar of coal tar soap with me. With its gentle fragrance I did suspectEd that the house maid might have contacted Housekeeping complaining that someone had creosoted a shed in the bathroom overnight.

Our holiday starts in the capital, Colombo, where later in the evening we met up with our small tour party. The plan is to take a mini bus and go inland and then down to the various sights. So with today to paddle about by ourselves the present Mrs Ives suggested a city tour in a tuk-tuk. This is a cabriolet moped driven by a man with nerves of steel in heavy traffic. I was indifferent really. Sri Lanka has a population of nearly 22 million with 750,000 living in the capital, it is a busy and congested place. However Grumpy was instructed to comply and I was led to Reception to organise. Via the hotel we found a tuk-tuk tour for 3,600 Rupees (£16) for two hours. This brings us onto a reality check about the country.

You cannot help but feel a very rich and overly entitled Westerner here. Anything that is tourist based and near the tourist areas/hotels is at Western prices but elsewhere the people seem to earn very little so that lots of things simply cost pence. What’s the problem Tony? Well inevitably such imbalances mean a majority of people live just above poverty and there are many, by corruption, living in great comfort. There has been a recent disposal of the Prime Minister for corruption. Our tuk-tuk driver commented that the ex-PM’s wife had ended up with two tonnes of gold via various means. Clearly she’s sorted her pension out.

Our tour guide driver steered his weapon into the traffic and whilst ensconced in the back it was like being in a Play Station game with sensory overload – lurching, sudden braking, continual horns, fumes, incredible heat and a vista that sped past. He took us around a number of religious buildings. Always informed, cheerful and with great English. Before returning to Sri Lanka he’d had a stint in Qatar working in security at a mall. The city seemed a lot of ‘old’ slowly being overtaken by new buildings and roads. There is a rich cultural heritage with occupation by the Portuguese, then the Dutch and finally the British from the early 1800s until independence in 1948.

It was energetic, bustling and colourful. 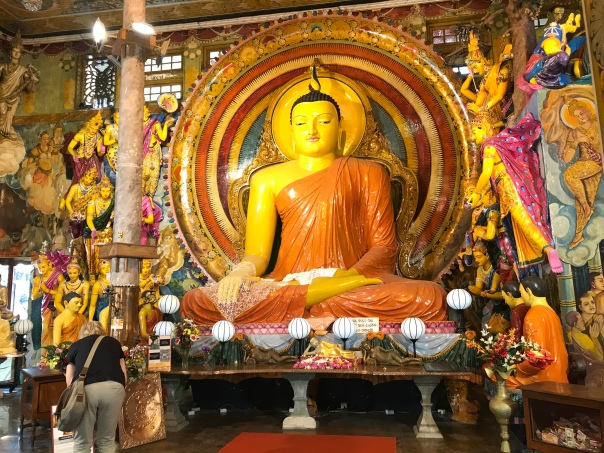 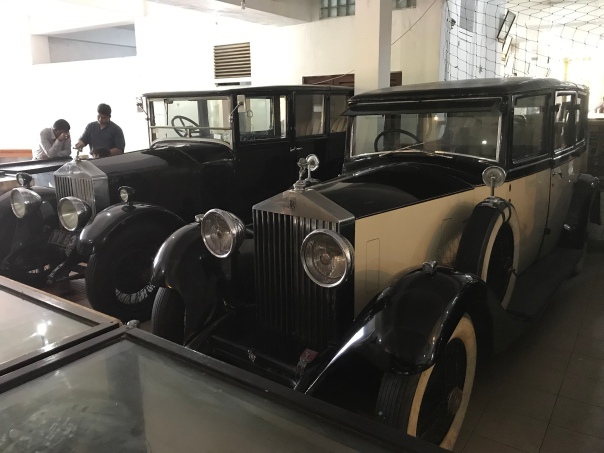 This was a curio of a place with a museum as well as place of worship around an old tree. I understand Christianity and Islam but had no idea what Buddhism was about, how they worshipped or to whom. I think I’ll find out but it seems to involve old British cars and my old friend the ‘Philip’ again.

Sadly we finished the cultural tour and suddenly ended up in a jewel showroom. Here, held as captives, we were engaged by the charming salesmen talking about the wonders of sapphires and rubies. Neither of us wanted to visit or talk about gems and politely heard them out. We later found out that gems are one of Sri Lanka’s exports and the country is renowned for them. Escaping the showroom was difficult and prices were banded about with ludicrous discounts. Frankly I have no idea what such items would cost in the UK or whether it was a bargain. Neither did I know whether these several hundred dollar chips of mineral were simply bits of bottle glass or precious stones. I subsequently wondered whether anyone who was led into these places knew what they were looking at. Spontaneous, on the spot, purchases don’t usually start at $440, do they?

I forgave the taxi driver, as making a living seems tough, but declined the next ‘exhibition centre’ and we headed back to the hotel. Oh yes and we rounded up the 3,600 Rupees to 4,000. (Was that because we were generous or had no change!?)

Later I needed to change some money. The hotel rate was pants compared to the airport. As I wandered away from the hotel I was accosted by the usual men attempting to sell you a taxi ride, a restaurant and currency. On the latter I enquired as to the rate and it beat the airport. I changed £100. As I’m walking away I start to wonder if the cash is real or whether with my new wad I can buy Bow Street, The Old Kent Road and Fenchurch Street Station. Let’s hope not!

We have a lot of iPhone charging cables: all in York. So I found a kiosk in a busy street and asked if they had a cable. “Do you want a good cable or a bad one, sir?” So I gave it a little thought and decided that if Anna missed out on the odd G & T because of my profligacy then so be it.

So chores sorted we met up with two Canadians, one Russian, three Americans and two Australians. Blog gold I thought as we trundled off to the bonding meal.