Anna had been the architect of the Croatian and Bosnian holiday and she picked Makarska for the next two nights. Passage from Bosnia had its moments of tension with a border to cross. This led to the long lost excitement of having your passport stamped. At the Croatian border we passed through Passport Control to be faced next with Customs. This was a slow process. At the booth a nice middle aged lady asked “do you have any cigarettes or alcohol?” I quickly said “no”. On my mind was a large sealed box with a bike in the boot of the estate car. It only had a bike (in bits) in it but I really didn’t want to have it opened with the removal of tape and the spilling of loose pedals, a saddle etc. So when my first wife, thinking she was hilarious, chirped up that she had a can of beer I anticipated that Alsatians would be sniffing the wheel arches and crack troops would be dismantling the car nut by nut. Fortunately the Customs Officer recognised my wife’s comment as a joke and we were allowed to proceed.Makarska is on the Dalmatian coast, about 50 miles south of Split. It’s a resort town with a flourishing frontage of pebble beaches, restaurants, bars, endless sellers of beach balls, knock off replica football shirts and water sports. It was heaving. Without the crowds it would have been attractive with its marina and sparkling clear water.

Anna had visions of something a lot more elegant and charming in mind when she booked this interim stop before Split. (I shall be supervising her more closely in future).In high summer there were mainly Croatians holidaying but also lots of Czechs, Slovenians, Poles, Bosnians and then the usual limited sprinkling of Germans, Brits and Scandinavians. I imagine that the resort was a well known Iron Curtain destination from back in the day and still remains popular with those who can reach it by car. It has no rail or air links but doesn’t lack patronage. It’s on the sliver of coastline that is still toward the south of the country before the borders push back inland to Zagreb in the north. Behind the coast are a majestic line of grey and very sunlit mountains.I hated it.If I had had a young family who wanted to be in the water or teenagers/ young millennials who like to mooch about in very little, other than Ambre Solaire, and then danced on a houseboat to Euro Pop until the early hours it would have been unbeatable. I didn’t and you were left in the day with considerable crowds milling about in 34°C, (93°F) whooping and splashing about (regrettably enjoying themselves!) The ‘front’ was probably two miles long. As Anna observed, attempting to adjust my withering assessment, then we didn’t see any drunken behaviour. It appears these holiday makers enjoy, rather than abuse, a drink. Also all prices encouraging fell as you headed north away from Dubrovnik.At this point I must add that Croatians speak excellent English and it is the lingua franca. It is the default language for anyone who isn’t Croatian. Less impressive is the use of it as the language on every T Shirt. At this point you think that some student of Friends has got a source for buying Bangladeshi cotton wear and has a printing press. Gems such as “I used to care but now I know I don’t” and “I believe in me” are typical along with “WTF”.(I know they wouldn’t dare use the same acronym in Croatian for the shame they’d feel in trying to explain to their grand parents why they had put some profanity on a piece of clothing they wore). 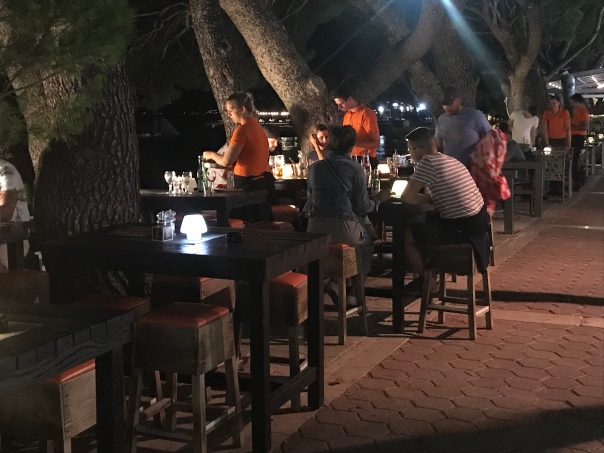 Our accommodation for two nights had a wonderful view, balcony and a helpful landlady but for 1,925 Kuna (£230 or $304) we got a badly equipped studio with a fold out double bed from IKEA. Even your teenage daughter’s friends would have complained about spending two nights sleeping on this back breaker. Our host had a job near Augsburg in Bavaria in a dental practise. This we learned as she collected the rent before departing 600 miles north. However, we could contact her on her mobile if we needed anything. We did and dutifully a sister arrived with a kettle and ice tray for the freezer box! All was not lost if I tell you the highlights included finding a replacement for my broken soap box and a seafood risotto in a quiet restaurant way off the front whilst watching France vs Belgium. It will not make my ‘50 Places To Visit Before You Die’ list. We were happy to pack up and head north as soon as we could.